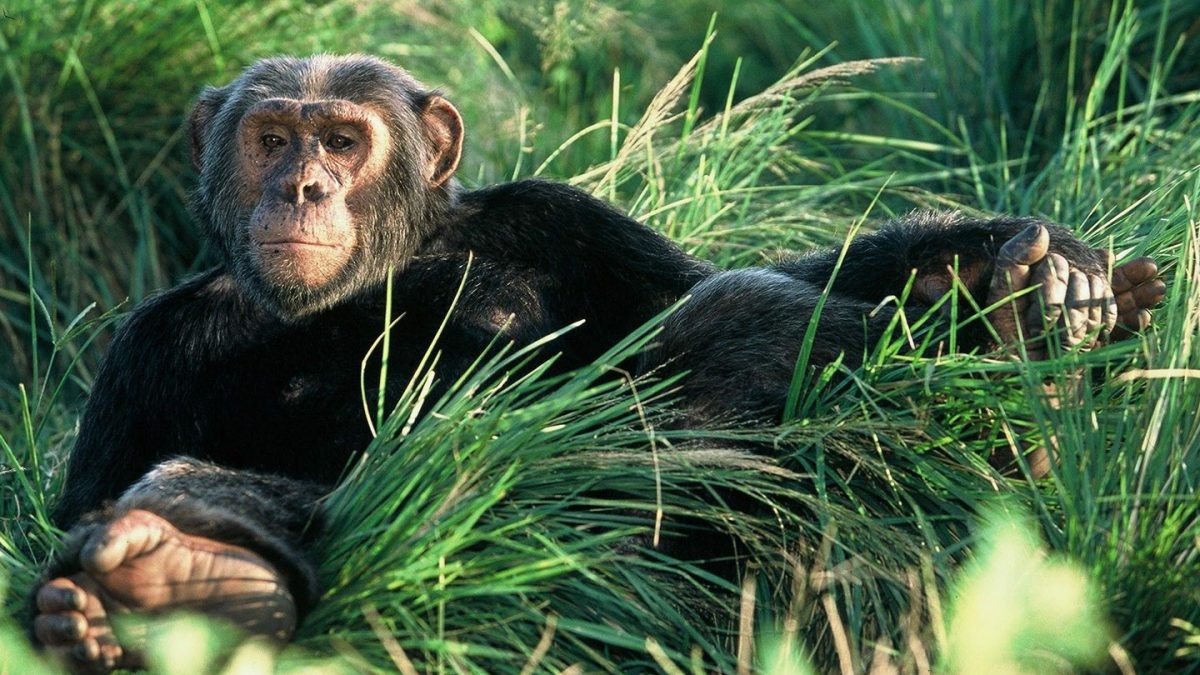 Chimpanzees are the closest living relatives to humans with 99% identical DNA and their brain is less than one third the size of human brain. They are considered to be one the most exciting animals to see on your Ugandan safari.

Uganda has a population of close to 5000 chimps distributed in various forests and game parks. Chimps are covered in coarse black hair, has a bare face, fingers, toes, palms of the hands and soles of the feet. They have a life span of more than 60 years but rarely live past age 40 in the wild. Female chimps are slightly smaller in nature while male chimps can weigh up to 70kgs.

Chimpanzees live in communities with large male and female and always use tools when eating ants from anthills, in most cases larger males like putting on displays to command respect.

In Uganda Chimp tracking is done twice a day morning and evening because of conservation reasons.

Where to Trek Chimpanzees in Uganda

Kibale forest national park is recorded to be one of the loveliest and most varied tracts of tropical forest in the pearl of Africa (Uganda).

It is a habitat to a total of 70 mammal species, most famously 13 species of primates and birds. Kibale national park is one the best safari destinations in Africa for its habituated chimpanzees and certainly the best place in Uganda to track man’s closest relative. The park covers an area of about 795km and famously known for chimpanzee tracking.

Chimpanzee Trekking: This is the most popular activity in Kibale Forest as earlier mentioned, and the chance of locating chimps in this forest is 90%. Since Chimps are close to humans, they live in what is coined a “fission-fusion society” in which all community members know each other but feed, travel, and sleep in much smaller groups of six or fewer.

Chimpanzee Habituation: This is a specific experience of Chimps getting used to humans. In this case it’s a life time adventure because it allows tourists to be with the chimpanzees all day long in their natural setting that is why habituation permits are more expensive compared to trekking permits.

Bigodi Swamp Walk: This is one of the key areas visited when you pay a visit to Kibale forest national park. The Bigodi sanctuary offers chances of spotting mammals, rare primates and bird watching.

Kibale Forest Walk: The forest walk is also one these off the beaten track for tourists in this forest. The hike enables you encounter primates, birds and mammals like antelopes, bushbucks and many more.

Amabere Ga Nyina Mwiru:  These are caves near Kibale forest and were named after King Bukuku’s daughter Nyinamwiru. Exploring these caves gives you a deeper knowledge of the people living around the area and the Batoro cultural history.

Budongo Forest also known as Kaniyo Pabidi is the biggest Mahogany forest found in the whole of East Africa as well as habitant to 600 chimpanzees of which a small number has been habituated for eco- tourism. The Budongo chimp tracking permit is cheaper compared to Kibale chimp tracking permit.

Kyambura also known as “Valley of Apes” is found in the eastern of Queen Elizabeth national park. Tourists that have less time to go to Kibale Forest national park which is considered to be the best place to trek habituated chimps in the whole of Africa can go to kyambura gorge.

Kyambura gorge permits cost 50usd as compared to Kibale permits which cost 150usd because this gorge has only one party of chimps that is very mobile and sometimes clients fail to allocate these great Apes.

Ngamba island chimpanzee sanctuary is home to 49 orphaned chimpanzees rescued from across East Africa. The sanctuary is located on Lake Victoria, 23 km southeast of Entebbe. Enjoy your visit as you participate in feeding and caring for the 49 chimps on Ngamba Island. 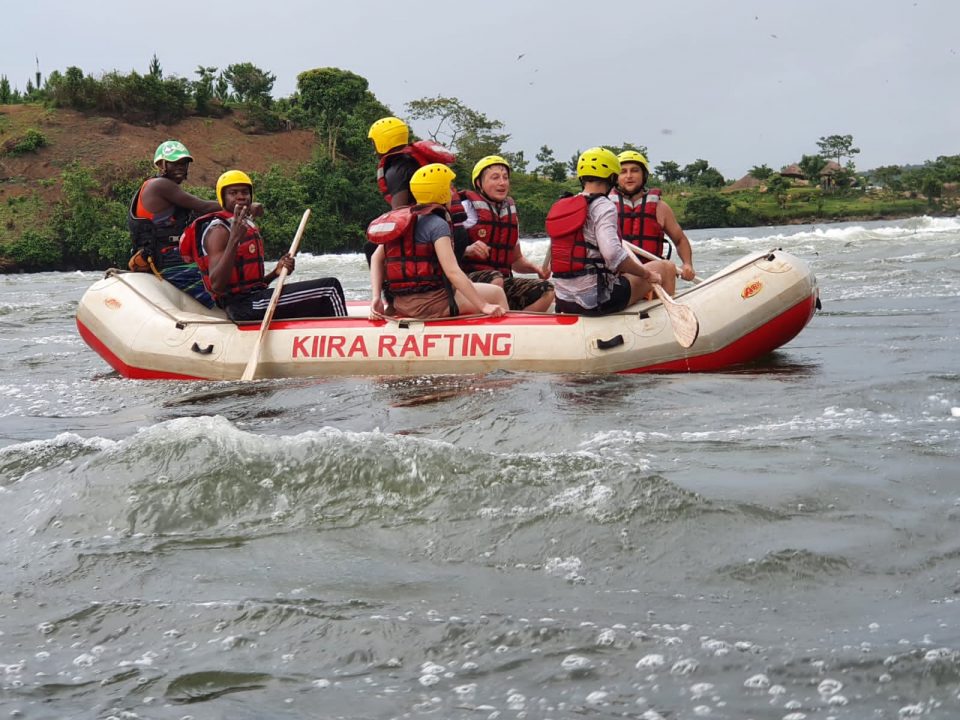 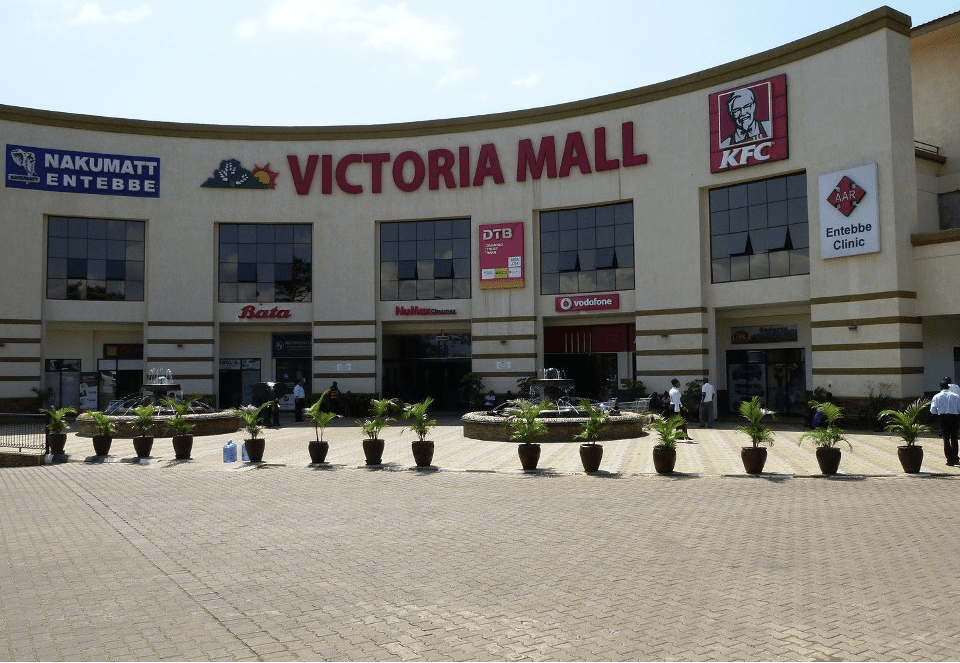 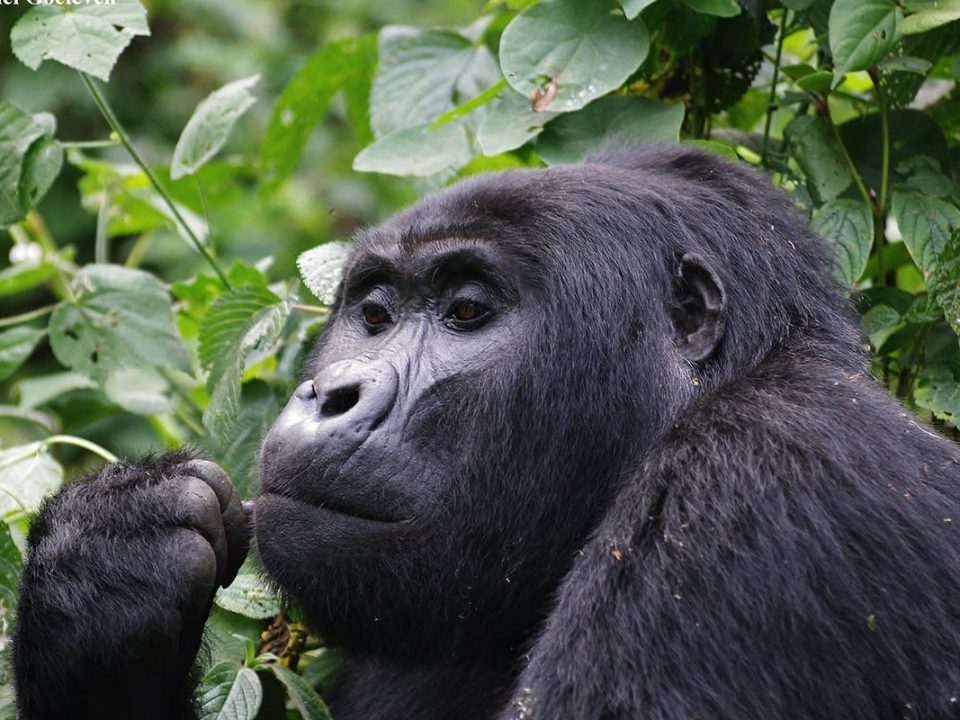 Enjoy the sight of chimpanzees going about their daily life

Venture into the jungles as you carryout chimpanzee trekking through the forest, listen quietly for the frenzied hooting of excited chimpanzees well before you catch sight of them swinging swiftly through the trees. You will often hear them long before you see them as they whoop and holler and break branches high up in the dense forest canopies they inhabit.

There are very few places left where you can still see chimpanzees in the wild with the best countries to see these endangered creatures being Uganda, Rwanda and Tanzania.

Most chimpanzee families in these places are wild, though many groups have become fully habituated to humans. This means that along with your guide you can get much closer to them to study their behaviour and to take photographs.

Chimpanzee tracking also known as Primates walk begins at 08.00 for the morning exercise, 15.00 for the afternoon exercise and lasts 2 to 3 hours according to where the chimpanzees are located and how fast they are moving. Chimpanzee are the most sought after primate by visitors, but you should look out for the black & white colobus, red tailed monkey or the grey cheeked mangabey.

Chimpanzee Habituation Experience  is a lifetime experience that allows you to accompany researchers for habituation of the chimpanzees as they go through their daily activities, thereby getting used to human presence without changing their natural. During your tour, expect coming across the chimps de-nesting (in their nocturnal nests) between 05.30 to 06.30, follow them throughout the day till they make new nests and the night around 19.00. The Habituation Experience can only be experienced in Kibale Forest in Uganda.

Chimpanzees are our closest living relatives sharing 98% of human DNA, they are Sociable, intelligent, communicative and have the ability to utilize tools like rocks for crushing nuts, empty pods for hollowing out water plus sticks for capturing termites from their holes. The average weight of an adult well grown male chimpanzee is between 35 and 70 kilograms, with a height of approximately 3 meters whereas tan adult female chimpanzee weighs between 26 and 50 kilograms and a height between 2 and 4 feet. 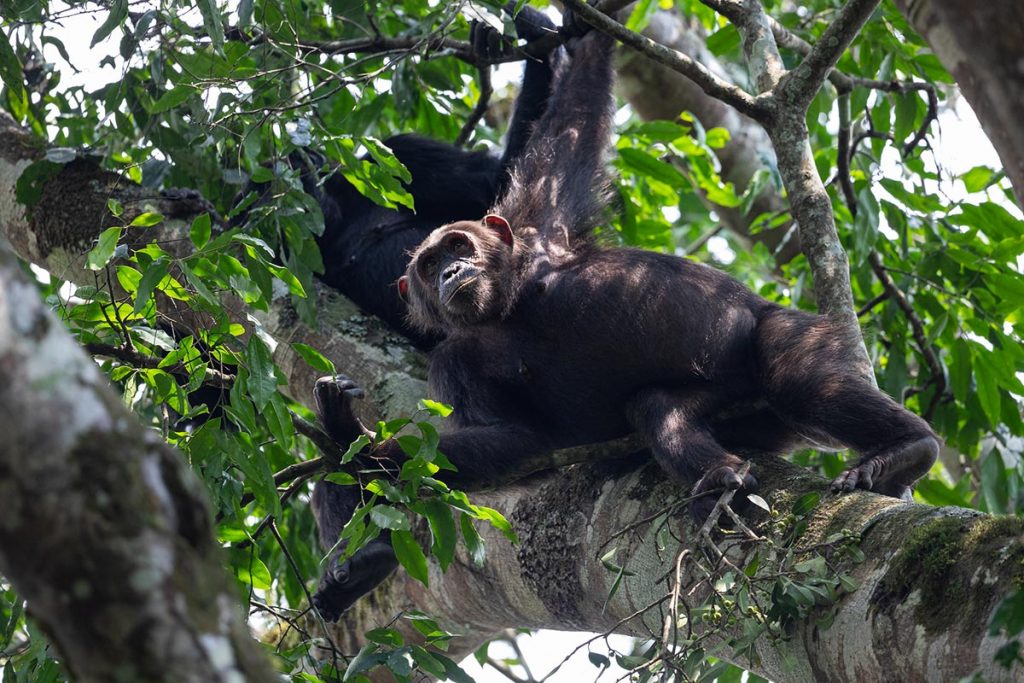 Where to Trek Chimpanzees in Uganda.

While trekking the chimpanzees, it is not a guarantee that you will see the impressive clients though Kibale forest offers a 95% of viewing the chimpanzees. Uganda is a primate hub with over 13 different primates and the chimpanzees being among them and they can be viewed in the places below;

Enjoy the sight of chimpanzees going about their daily life, eating fruit, watching and grooming each other. Tracking chimpanzees is a less tiresome compared to tracking gorillas since the landscape in the above areas is not strenuous though they move faster and are often high up in the trees.

In Uganda today, efforts to conserve the chimpanzees are extensively acknowledged and well supported by the Jane Goodall Foundation which has played a major role in the overall conservation of not only these Chimpanzees but the Gorillas as well found in Uganda.

What to carry while Chimpanzee Trekking

Rules and regulations of Chimpanzee tracking

Chimpanzees though habituated are still wild animals that when provoked they will become aggressive to define their territory. Below are some guidelines to follow while trekking the chimpanzees and while in their company.

Chimpanzee tracking is fascinating experience where you spend time in the natural jungle tracking the impressive creatures. Ganyana Safaris will organize for you a tailor made safari where you will be allowed to spend an hour with our mesmerizing relatives, as you observe them swing from one tree to another, feed, play about or progress speedily on the ground right in front of you. 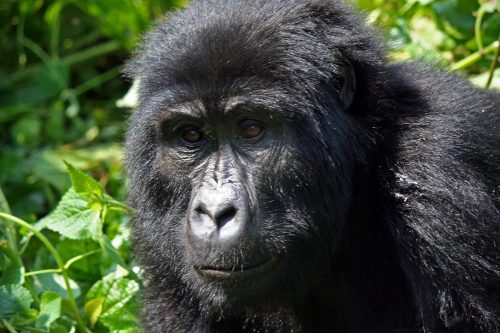 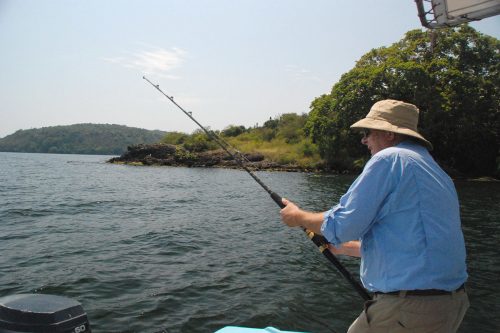 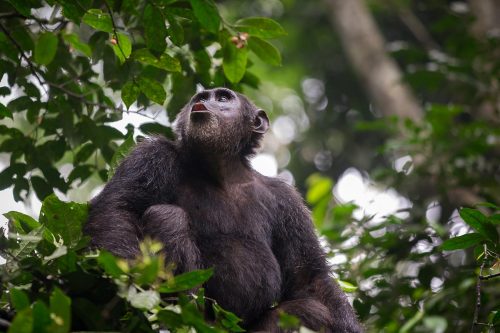 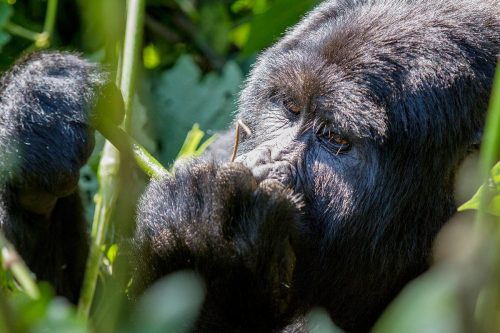 You will track gorillas in Bwindi Forest and later go for a bird watching experience.

You will go for game drives and watch birds too 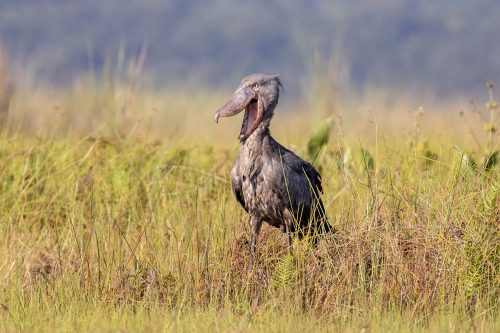 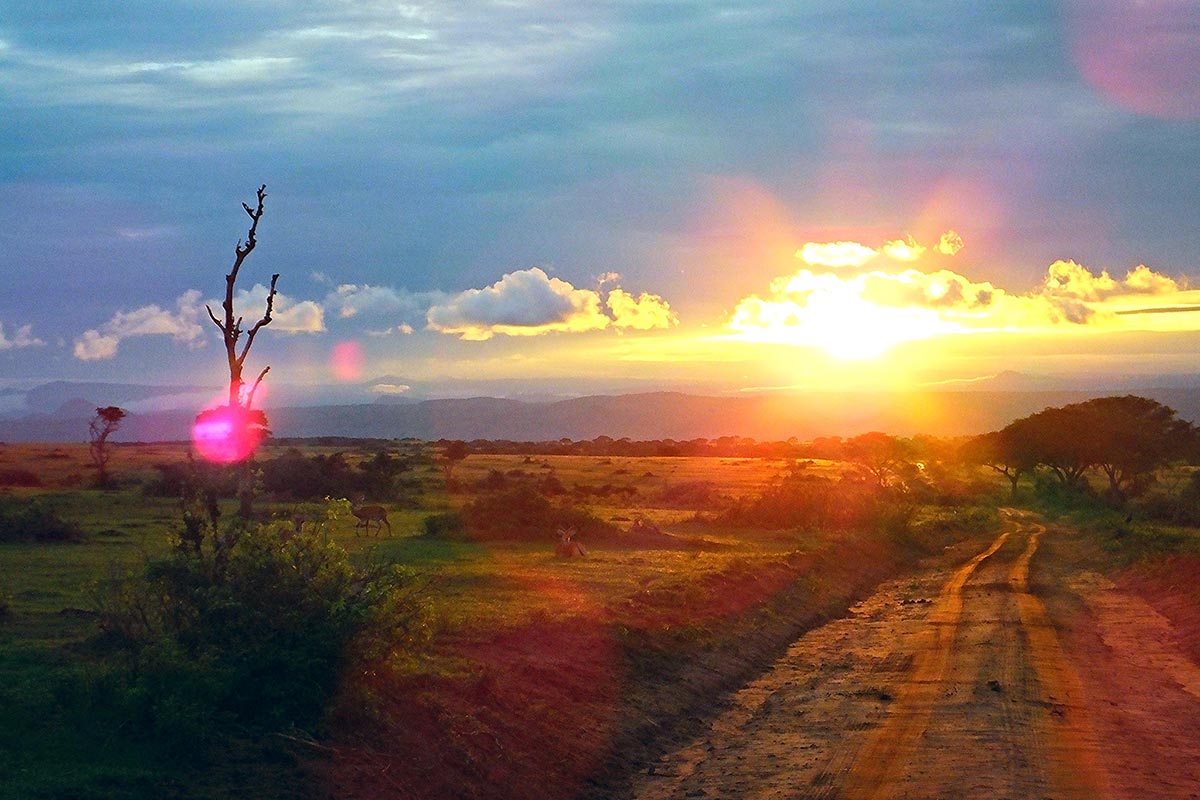