Mt Rwenzori National Park is a well-paced exploration with an immersive and fulfilling experience, the provides stunning views of the glacier and snow-capped mountains just kilometers from the equator extending to the Virunga National Park in DR Congo alongside the alpine highland glaciers, snowfields and blue cirque lakes making it one of Africa’s most beautiful mountain parks.

Located in southwestern Uganda, the slopes of Mt.Rwenzori are steep, rugged and well watered, rising high above dry plains and are ice-capped. The slopes consist of ancient rocks which were extruded from the surrounding plains during the formation of the western rift valley, these Precambrian rocks have produced soils of low fertility, except on parts of the northern ridge where volcanic ash from the Fort Portal plateau was deposited.

There is no place in Uganda that harbors the most beautiful and unique vegetation like the Rwenzori Mountain slopes. With this unique luxuriant vegetation, the park receives higher levels of rainfall compared to other places elsewhere giving an exciting combination of both heavy rain fall alongside great exposure to the sun 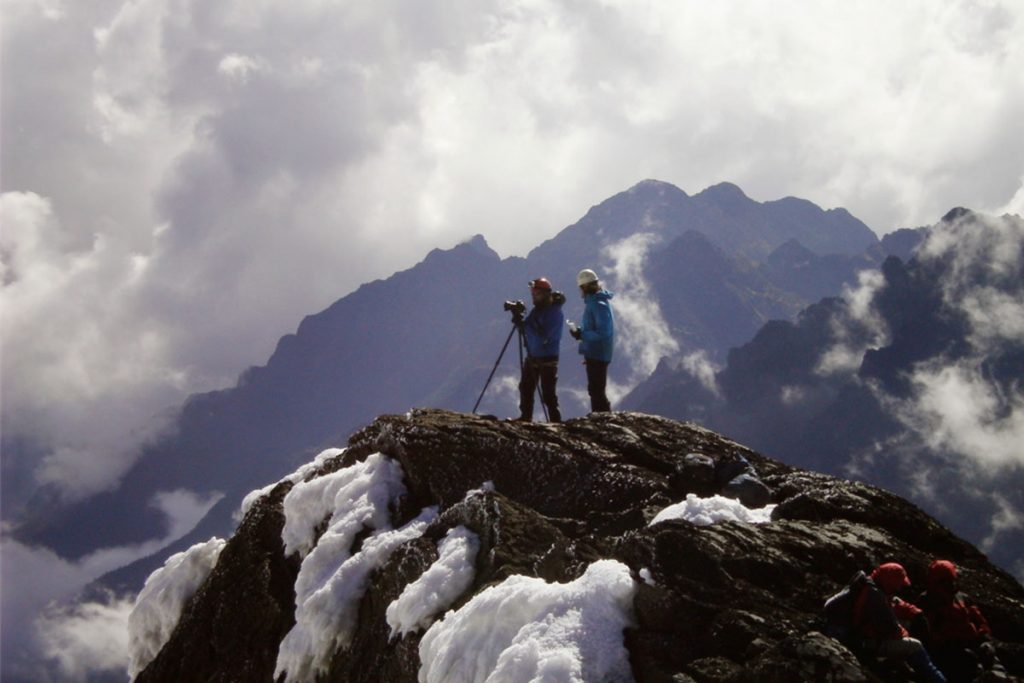 The snow capped peaks and its lower slopes are blanketed by a flourishing bamboo, damp montane forest and moorland, huge tree heathers, vibrant mosses while the large lobelias plus the everlasting flowers, forming an amiable vista offer a sight like no other.

Known mostly for its snow capped peak, the park is home to the best mountaineering services in Uganda with concentration of waterfalls, blue cirque lakes, hot springs, uncommon vegetation.

The Rwenzori comprises six different Mountains including Mounts Stanley (5,109m), Speke (4,890m) and Baker (4,843m) and all bearing permanent snow and glaciers and the peaks can be reached by hiker through the Central Circuit and Kilembe Trails.

This is a challenging seven-day climb providing a circular tour of the high Rwenzori. From the trailhead at Mihunga, the route ascends to the Bujuku Valley via Nyabitaba. Clients joining the Central Circuit after Bujuku traverse the Scott Elliot and Fresh field passes to descend through the Mubuku Valley. 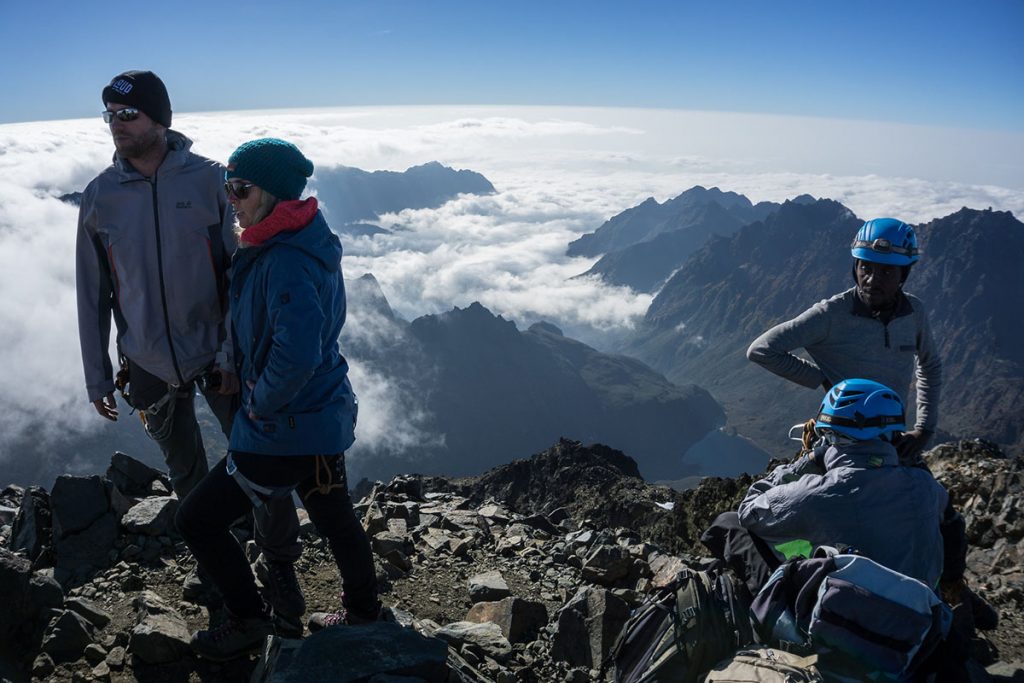 The trail ascends the southern slopes of the Rwenzori from a trailhead at Kilembe near the town of Kasese. The route along the lovely Nyamwamba Valley passes glacial lakes and some stunning viewpoints before joining the Central Circuit at Lake Kitandara.

The Park hosts a population of around 70 Mammal species with animals including the elephant as well as, Rwenzori otter and leopard and primates such as chimpanzee, Angola colobus, black-and-white colobus, blue monkeys, small antelope such as bushbucks; and unusual reptiles such as the three-horned chameleon.

Home to over 217 species of birds, this park is an Important Birding Area with spectacular birding opportunities mostly in the montane forest including Bee-eaters, Robins, Sunbirds, Barbets, Rwenzori Turaco, Long-eared Owl, Bearded Vultures, Black and Swift Eagles which are rotating from side to side looking for prey.

The Park is well recognized for its diverse and beautiful flora, hikers who climb following the Rwenzori route get the opportunity to view the beautiful vegetation ranging from tropical rainforest to the tree heathers, montane forest, afro-alpine and bamboo. 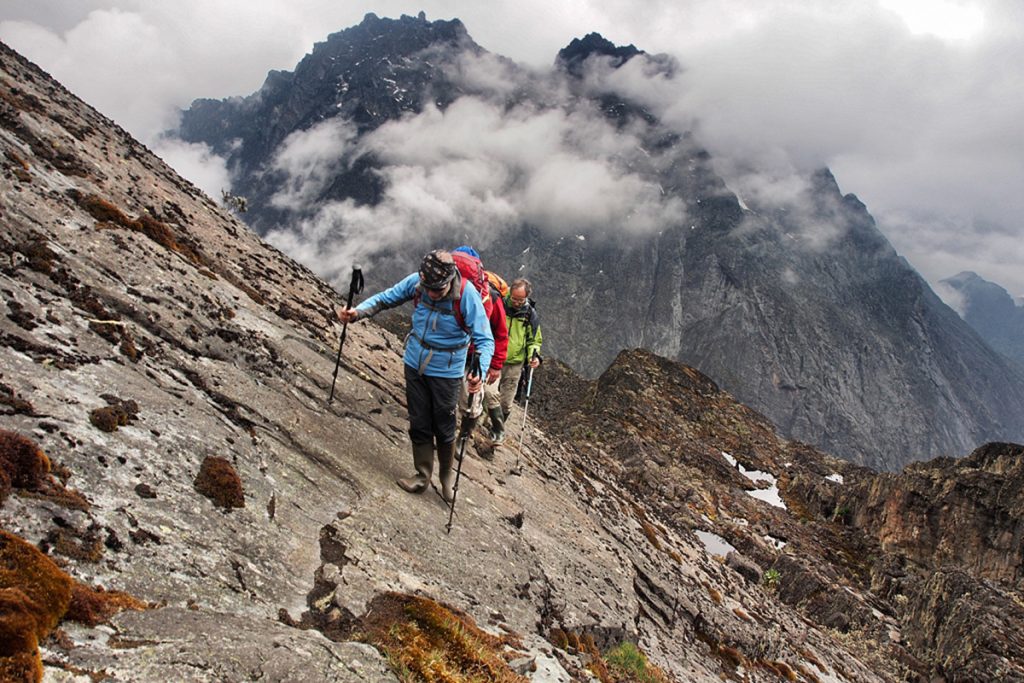 They are over 20 beautiful lakes in Rwenzori Mountains National Park and the most accessible of all is Lake Mahoma (2,651m) in the bird-rich forest of the Central Circuit. The beautiful Lake Bujuku which lies at the apex of the deep, glacier carved Bujuku valley in the shadow of Mountain Stanley as well as Mount Baker plus Speke.

Discover the calm, polite farming village identified as Ruboni which is home to an estimate 2,000 Bakonzo people living at the foothills of the mountains of Rwenzori. On the community visit, they show to visitors their daily activities which range from raring their traditional animals and crops to preparing nice delicious Ugandan meals with the freshest ingredients, meet basket weavers and storytellers, and enjoy a vibrant dance performance .

The nature walks include trails up to Lake Mahooma and Buraro chimp forest, walks through the communities of Kichamba to reach the Karangura ridge and hiking to Bundibugyo area through Bwamba pass.

It is the trailhead mainly used by hikers to the seven-day Central Circuit to the high peaks and the beginning point for hill walks nature through the traditional homesteads of the local Bakonzo community.

These are the historical remains of first King of Rwenzururu kingdom, the historical leaders identified by the names of Isaiah Mukirania Kibanzanga, who is so much believed to have played significant role of saving the Bakonzo tribe from the Batooro oppression. 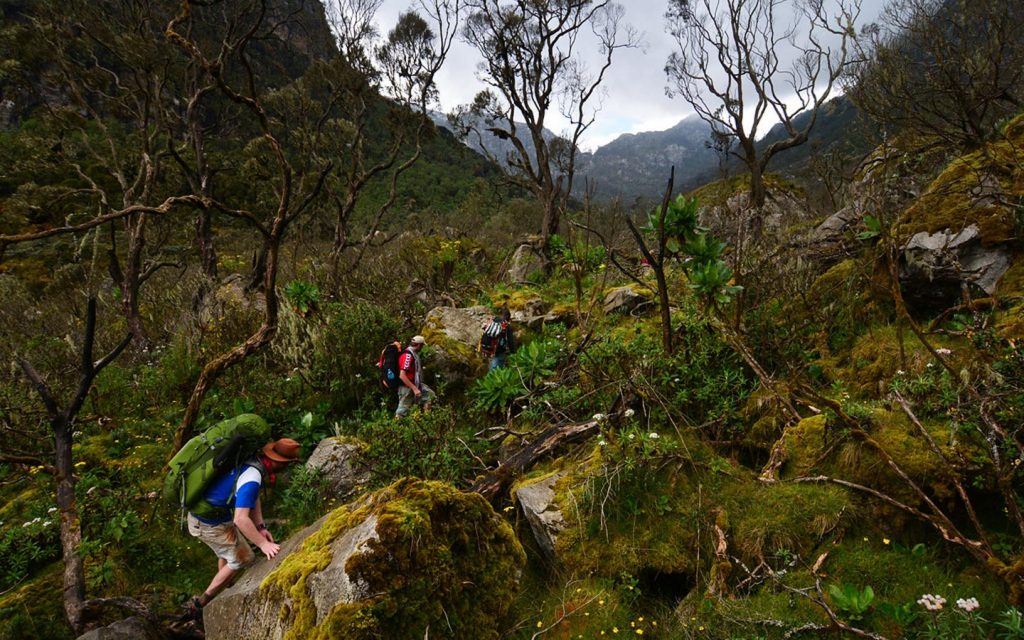 Its diverse and beautiful flora attracts hikers who climb following the Rwenzori route to get the opportunity to view the beautiful vegetation ranging from tropical rainforest to the tree heathers, montane forest, afro-alpine and bamboo.  The afro-alpine characterized with emblematic big forms of Senecio (groundsel) and lobelia, which is one of the world’s unique botanical communities.

The diversity of the vegetation in the park hosts a population of around 70 Mammal species, with 6 species which are endemic to Albertine Rift, 4 species which are endemic to the park and 3 rare species. The wildlife in the Rwenzoris  include the elephants, Rwenzori otter and leopard, chimpanzee, Angola colobus, black-and-white colobus, blue monkeys, bushbucks and and the three-horned chameleon.

Where to stay in Mt. Rwenzori National Park

Mt Rwenzori is a snow capped mountain and is one of the most visited parks in Uganda for its volcano climbing opportunities that attract a variety of mountain climbing enthusiasts. Though this park has less visitors, there is enough lodging choices to support the visiting travelers including;

How to get to the Mt. Rwenzori National Park.

For travellers that enjoy Mountain Climbing and come all the way to E.Africa, Mt Rwenzori is a less complicated option compared to Mt. Kenya and Mt Kilimanjaro. Mt.Rwenzori National Park is located in Western Uganda bordering Virunga National Park in the Democratic Republic of Congo and can be accessed by either road or air.

The park can also be accessed by air with  chartered flights from Kajjansi airfield or Entebbe International airport with Aerolink to Kasese airfield and then be transferred by your driver guide to your destination.

Located in Kasese, the park is 5 hours from Kampala, Kasese town can be reached from Kampala via;

The peaks of Mt. Rwenzori can be accessed through the Nyakalengija central circuit and Kilembe Trail with both their starting points located near Kasese town.

The park can be be visited all through the year, this area receives the highest amount of rainfall on the eastern slopes of the mountains.

The periods of July-August and December-February are the driest months and are the best for the hikers to trek and the highest amount of rainfall begin from March-May and September-mid December.

The Conditions on the mountain are really challenging even to the experienced hikers since mountain Rwenzori is renowned for its steep, slippery trails with regular rainfall plus cold temperatures, high altitude and mud.