Mgahinga Gorilla National Park is a home to the most amazing and an unforgettable experience in Uganda. Offering Gorilla Trekking, Golden Monkey Trekking and Volcano Climbing in one location. Mount Gahinga has a beautiful swamp, Mount Muhavura has a crater lake and Mount Sabinyo gives the best and an amazing view experience of the at the summit where one sets foot in all the 3 gorilla countries; Uganda, Rwanda and Democratic Republic of Congo.

Known as one of the most scenic parks in Uganda, its seated high in the clouds at an altitude of between 2,227m and 4,127m with a natural beauty that inhabits the remaining mountain gorillas in the world. The park has more to it than just gorillas like a lifetime wildlife adventure, hiking and nature walks in this beautiful game reserve.

Mgahinga Gorilla National Park is home to one gorilla family known as the Nyakagezi group comprising of three silverbacks, two adult females, two black backs and two infants at present. This group used to migrate over the boundaries until it finally settled in Uganda rendering it readily available for tracking by travelers. 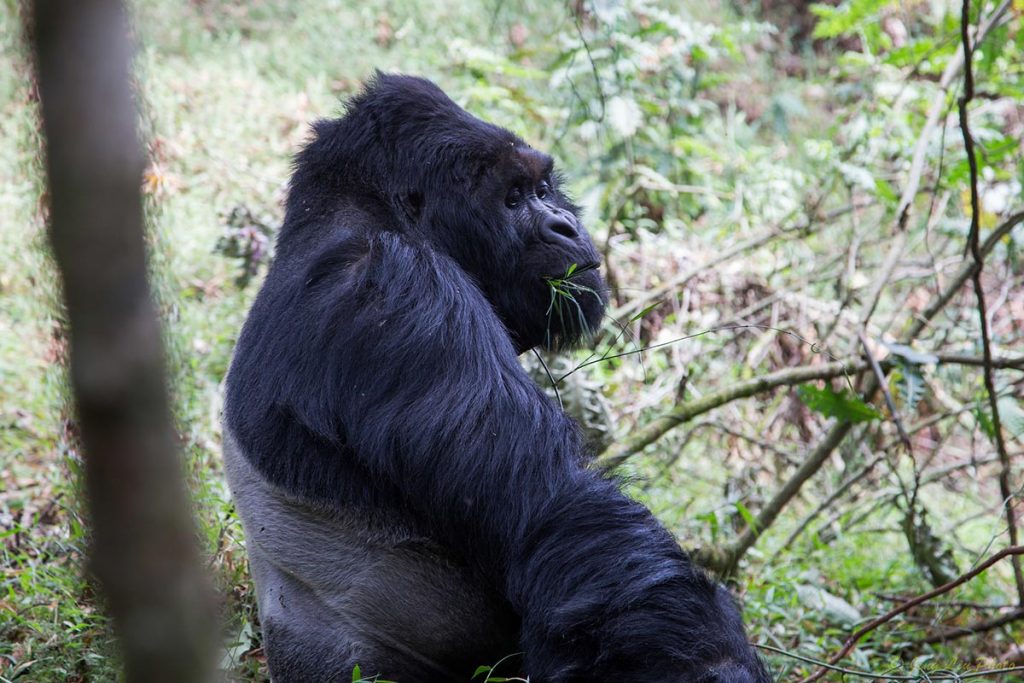 Mgahinga Gorilla National Park mostly consists of partly forested slopes and the extinct volcanoes with the Virunga Mountains dominating the landscape alongside variety of wildlife inclusive of the most sought out mountain gorillas.

The climate in Mgahinga Gorilla National Park supports vegetation consists of an afro montane forest covering the smallest area as a vegetation type on the continent. The Montane woodland is an open forest with dense ground cover consisting of woodland and only small area of pure montane forest at the base of Mt. Muhabura following encroachment by the growing population around the area with a ground cover composed of grasses, mosses, lichen and liverwort.
Mountain Gahinga has a beautiful swamp at the top, Muhavura has a crater lake and the Sabinyo gives you the best and amazing experience ever whereby climbing to its summit you set a foot in 3 countries; Uganda, DR Congo and Rwanda.

Mgahinga is home to only one group that is tracked which is the Nyakagezi gorilla group, this group of Gorillas was a mystery to track back then due to its unpredictable availability as it move from country to country until it made Mgahinga its home.

The Park is also home to a troop of habituated golden monkey, which are endemic to the Albertine Rift and are restricted to the Virungas and can also be tracked in Mgahinga Gorilla National Park and Volcanoes National Park. 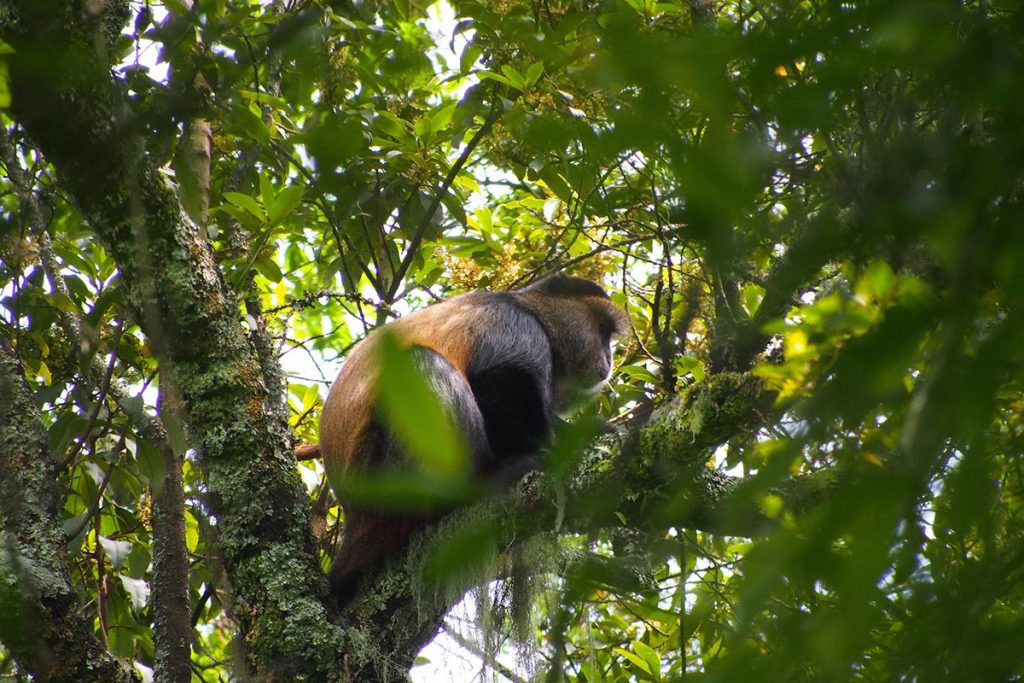 The entire Virunga conservation area has over 250 bird species with Mgahinga having a record of 115 bird species rendering. Mgahinga Gorilla National Park offers splendid bird watching safaris and it can be done all year round in the park, with the best time being April to Mid-May, and October to November. Some of the birds species include: White-necked raven, Black kite, Pin-tailed whydah, Double-collared sunbird, Speckled mouse bird, Paradise flycatcher,Ibis, Whydah, Speckled Mousebirds, Fire Finch Stonechat, Grey Capped Warbler, Waxbills,Yellow-Vented Bulbul, Alpine chat, Archer’s robin-chat, Blue-headed coucal and many more.

Where to stay in Mgahinga Gorilla National Park

The park is the only place where the remaining mountain gorillas are found rendering it one of the best places frequented by enthusiastic travellers in search of these endangered  species. They are variety of lodging options near and around the park and some of them include;

Things to do in Mgahinga Gorilla National Park

The place where “Gold meets Silver”, the park is home to both the endangered mountain Gorillas and Golden monkeys. This Park is one of the places that will offer you the thrill of various activities in one location including;

Mgahinga National Park is one of the places in the world blessed as a habitat to the remaining endangered mountain Gorillas. The Nyakagezi habituated gorilla group a can be tracked here  by travelers on a Uganda Safari. 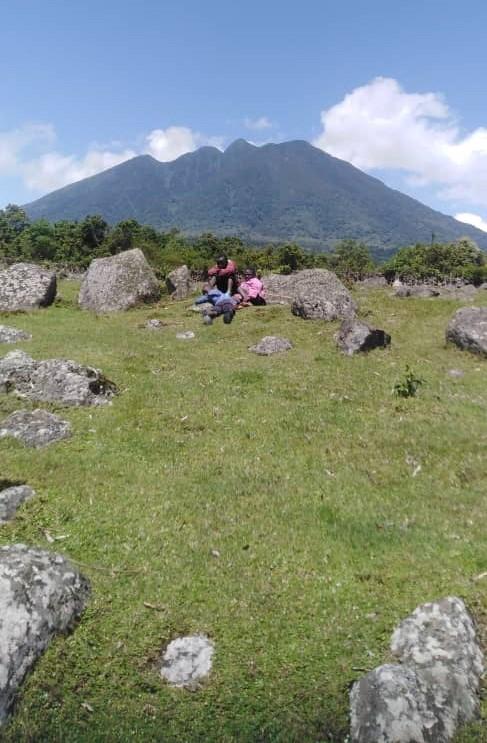 Golden Monkeys, are endemic to Mgahinga National Park and can often be found high up in the dense bamboo forests. There are estimated to be 3000-4000 individuals in the Virunga area, with 42-60 are habituated in Mgahinga.

Hiking adventures at Mgahinga National Park offer you a chance to hike through the thick forest to the Sabyinyo gorge that also features as the best site for birding safaris. The hikes allow you to explore the transcending vegetation zones along the Congo borders where you will glace several calderas.

Mgahinga Gorilla National Park is one of the most sought out birders’ paradise, the most popular birding area is mostly the gorge trail between the Sabyinyo and the Gahinga with spectacular views of the Dusky turtle dove, cape robin chat, black headed waxbill, streaky seed-eater, blue headed sun bird, regal sun bird and others.

Mgahinga National Park refuges all the 3 mighty Virunga Mountains and volcano climbing features among the safari highlights in the park especially on the summit of mount Sabyinyo about 3669 for 8 hours is such amazing adventure with a chance to glace swamps full of craters and giant lobelia, clear scenic views of the lake Edward, Virunga volcanoes, Bwindi Impenetrable Forest and the Rwenzori mountains.

Conduct cultural community walks in the Batwa community adjacent to the park and interact with the Batwa pygmies. There is Batwa trail, that takes you through cultural exploration with the former hunters- gatherers to explore more about their ancient lifestyles.

While in Mgahinga National Park you can trek both gorillas and the golden monkeys thus rewarding travelers with variety of natural wonders and wide range of attractions.

How to get to Mgahinga Gorilla National Park

The park is found in the southwestern part of Uganda in the Virunga Massif and sharing boundaries with Volcanoes National Park in Rwanda and Virunga National Park in DR Congo, it can be accessed either by air or by road.

Mgahinga Park is located at the far end of the south western part of Uganda and the drive from Kampala to Kisoro is about 8 hours and then it will take you about 2 1/2 hours to get to the park.

Mgahinga Gorilla National Park is 510 km from Kampala with the most commonly used route passing through Kabale and Kisoro, the road from Kisoro town is a mountainous tarmac road with steep ascents and descents with panoramic views.

The park is open  all through the year, though he dry season from late May to early October and December to February is the perfect time for gorilla trekking since the trails are drier, passable and less slippery.

The rainy season from late February to early May and mid October to November is not preferred because the tracking trails tend to be slippery and muddy hence gorilla tracking is challenging during these months.