The remarkable wildlife, attractive heritage, the famous Kazinga Channel which dissects the park, Lake Edward borders to the west, the famous Rwenzori Mountains, to the north and Lake George and the the Kyambura Gorge, the famous Maramagambo rainforest to the east presenting the best scenic experiences in Queen Elizabeth National Park.

Wildlife meets the scenic wonders presenting a true African wilderness experience with awesome views of the beautiful crates lakes winding through the rolling hills, the panoramic display of the Kazinga channel, the crater-dotted foothills of the Rwenzori range in the north, along the shores of Lake Edward.

Uganda’s most popular tourist destination takes you on an adventure as you capture all the actions teemed with wildlife, dozens of enormous craters carved dramatically into rolling green hills, panoramic views of the Kazinga Channel with its banks lined with hippos, buffalo and elephants, and the endless Ishasha plains with a myriad of Lakes of different types and sizes, they range from great fresh water Lake and inland salt Lakes to mirror surfaced crater Lakes. 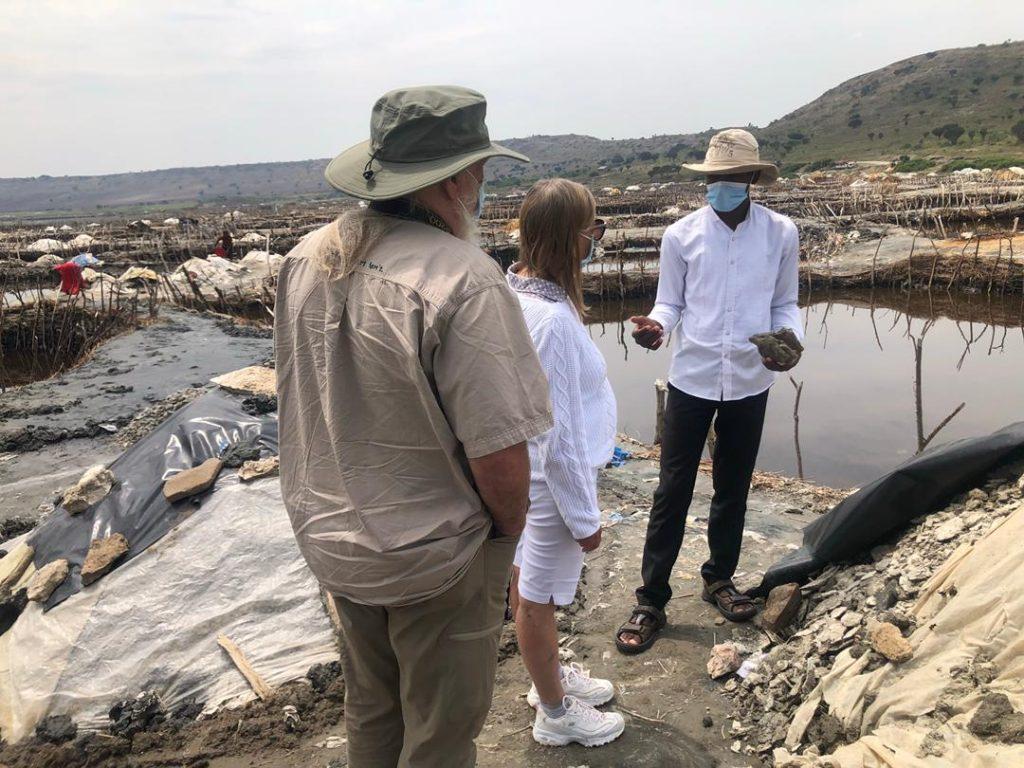 Queen Elizabeth National Park consists of a remarkable diversity of vegetation as reflected in the its variety of habitats such as Savannah Grassland mixed with various kinds of trees, shrubs and the candelabra Euphorbia trees. The  unique vegetation diversity in the park of around 57 vegetation species in 5 levels of vegetation include bushy grassland, Acacia woodland, Lakeshore or swamp vegetation along with forest grassland.

The diversified vegetation in the park provides habitats to over 95 mammal species including about 5000 hippos, 3000 Elephants and there are over 10,000 of Cape Buffaloes, Warthogs, Waterbuck, Uganda Kob, the rare semi-aquatic Sitatunga Antelope, ten species of primates including chimpanzee, Vervet and black-and-white colobus monkeys are easily spotted in the trees.The grasslands of the park settles wildlife such as Cape buffalo, Uganda kob, waterbuck, warthog, lion, leopard, hyena, giant forest hog and Topis.

Queen Elizabeth National Park is one of the most Important Birding Areas in Uganda with about 612 species of birds including African skimmer, Chapin’s flycatcher, Pink-backed pelicans, Papyrus canary, Shoebill stork, martial eagle, black-rumped buttonquail,the great flamingos and many more.

Things to do in Queen Elizabeth National Park

Queen Elizabeth National Park is one of the most scenic parks in Africa with a variety of Flora and Fauna that should be on your bucket list on your Uganda Safari. 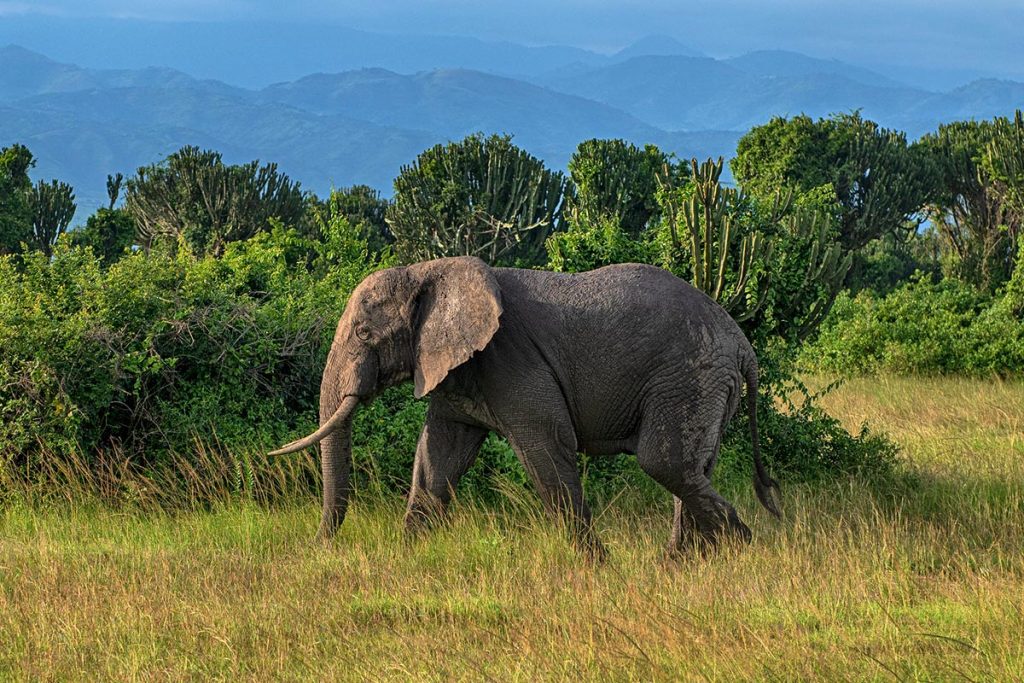 Kyambura Gorge is one of the best place to go on a Chimpanzee Trek due to its fascinating terrain,as you descend into the valley you will be simply amazed. There are 10 species of primates found in Queen Elizabeth Park and the most popular being the Chimpanzees in the Savannah of the Kyambura Gorge.

Boat Safari on the Kazinga Channel

This is one of the highlights of your safari in Queen National Elizabeth Park with one of the largest concentration of hippos in Africa. The launch cruise on the Kazinga Channel lasts 2-3 hours where you can see hippos, crocodiles, monitor lizards, elephant herds, buffaloes, antelopes and many species of water birds.

Mongoose Research Tracking takes place on the Mweya Peninsula and is a 3-hour activity that can be done with a guide who accompanies you as you set off to the Mongoose Research Area where you can observe the Banded Mongoose and learn about their habits.

Explore areas such as Maramagambo Forest, Kyambura Gorge which is part of the Western Rift Valley, the Mweya Peninsula, and a  hike along the Ishasha River.

Known as a birders paradise, it is one the most visited parks and should be  included on your Uganda Safari. The park has various attractions that including;

The 40m long channel adjoins Lake George to Lake Edward with the perfect view of the parks’ major wildlife ventures. The shores of the lake attracts a large concentration of mammals, birds and reptiles. 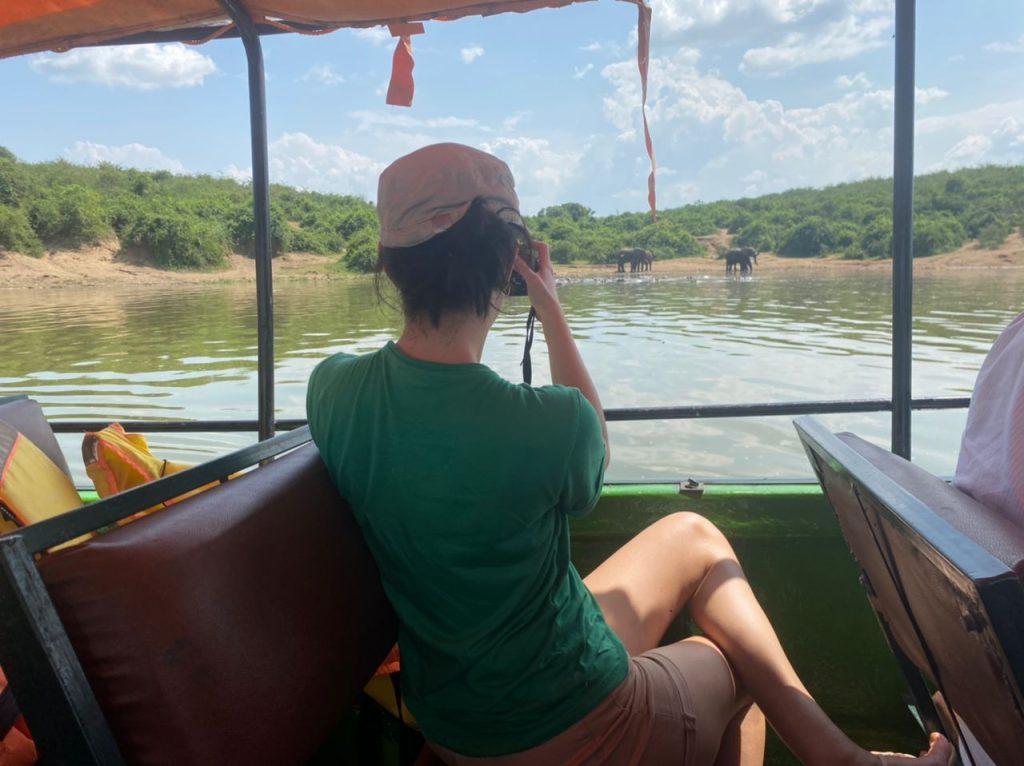 The Ishasha sector of the park has a diversity of wildlife such as the famous tree climbing lions, rare shoebill stork giving a genuine Africa wilderness experience.

The Equator and the Queen’s Pavilion

The Uganda’s Equator provides a beautiful place for photo shoots and the Queen’s Pavilion easily spotted by the northern entrance to the Crater Drive.

These volcanic basins spread across the park just 27 kilometers drive between Kabatoro gate and Queen’s pavilion offering views of the enormous craters, circular Lake, the Rift valley escarpment and the Kazinga channel and the backdrop of the Rwenzori Mountains.

Situated in southeastern side of the park, these areas offer great opportunities of encountering the chimpanzees, baboons and many monkey species, bird species such as the greater and lesser flamingos and great egrets.

The open savanna of Kasenyi is the best setting of real African safari experience with dream photographic opportunity of the Uganda Kob breeding ground that attract lions, warthogs grazing down on their knees, large dark elephants, buffaloes and numerous grassland bird species.

The Swamp between Lake George and Kikorongo

Birding enthusiasts consider this is one of the best spots for you to sight the rare shoebill stork and many native birds and endemics like papyrus gonolek and papyrus warbler and white winged warbler and during the northern winter big number of migrant waders and waterfowl.

Where to stay in Queen Elizabeth National Park

Queen Elizabeth National Park is one of the most frequented national parks in Uganda thus it has a variety of lodging choices.The accommodation in this park should be booked in advance when they are still available. Some of the lodging choices in this park include;

This park is open all through the year though game viewing is at its best during the dry season of January to February and June to August where most of the game converge near the water sources.

During the rainy seasons of April, May and September to October, some roads are slippery and impassable though this is the perfect time to conduct a Birding Safari.

The park is located directly on the equator, lying on the rift valley at an altitude range of 480m to 1390m. At a low altitude the  temperatures range from 18°C to 28°C receiving heavy rains of about 1250mm during the rainy months of March-May and September-November.

How to get to Queen Elizabeth National Park

Most travelers choose a Uganda Safari to be able to visit the various destinations inclusive of  Queen Elizabeth National Park which one of the most sought after parks in Uganda. Queen Elizabeth National Park  is between the Kasese, Kamwenge, Bushenyi and Rukungiri districts in southwestern Uganda and can be accessed both by air and road according to the traveller’s preference.

Queen Elizabeth National Park is also accessible by air through the nearby airstrips of Kasese, Mweya or Ishasha by scheduled flight or chartered aircraft from Entebbe International Airport or Kajjansi Airfield.

Aerolink flies from Entebbe to Kihihi Airstrip everyday, which is convenient for visiting both Bwindi Impenetrable Forest and Queen Elizabeth National Park.

The tarmac road from Kampala via Mbarara town and Bushenyi leads to the center of the park and covering a distance of 420 km while the north through Fort Portal covers a total of 410 km to the Mweya Peninsula, the main tourism hub.

The park can be accessed on the tarmac road through Mbarara to Kasese to Fort Portal covering a distance of 410 km. The park is 5-6 hours from Kampala on surface road via Mbarara.